2017 Laureate of the Arenberg-Coimbra Group Prize for Erasmus Students

It is with great pleasure that we can announce the result of the work of the selection committee established by the Executive Board to assess the nominations from member universities for the Arenberg-Coimbra Group for Erasmus Students.

The selection committee consisted of Professors Jeff Haywood, Joaquim Ramos de Carvalho and Lenka Rovna. The Executive Board has thanked the committee for their work.

We heartily congratulate Aura Nikkilä on winning the 2017 Arenberg-Coimbra Group Prize and look forward to meeting her at the General Assembly in Edinburgh where she will receive her Prize from the Duke of Arenberg.

Ms Aura Nikkilä has shown that the value of the Erasmus experience is particularly significant for gaining international and intercultural experience as well as for developing research interests including a theoretical framework and the specification of the topic of her thesis.

Ms Nikkilä spent 5 and half months at the University of Granada in 2012. Her motivation for selecting Granada was her knowledge of the language as well as her interest in art history. Living in Granada helped her to comprehend the language, even the Andalusian dialect, but most of all to experience an international environment in the rich historical background of an old city, which in the past was, and is again, marked by the presence of different cultures. Ms Nikkilä took all her courses in Spanish, and especially the course dealing with comics studies which played an important role in her professional growth.

It was in Granada that the idea of focusing on comics studies took shape. The course work concentrated on a comics book by Finish author Ville Tietäväinen called ‘Näkymättömät kädet’ describing the story of a Moroccan man who became a refugee in Spain. The novel, and Ms Nikkilä’s MA thesis deal with, according to the laureate: “global inequality, irregular migration, questions of ethnicity and racism, religion, honour and insanity, along with the crossing of borders. The main theoretical frame that I built my analysis on is transnationalism”.

Ms Nikkilä stressed how the Erasmus exchange, and the time she spent in the multicultural environment of Granada, influenced her way of seeing the world, her academic career as well as her understanding of the entangled history of Europe.

Having successfully defended her thesis, Ms Nikkilä was awarded the mark Laudatur, the highest grade for the thesis work. She is currently a PhD student at her home University of Turku.

The Committee would like to congratulate Ms Aura Nikkilä on this year’s Arenberg-Coimbra Group Prize and wish her a successful career based on her Erasmus educational experience.

We would also like to congratulate the other candidates, whose testimonials were additional excellent examples of the impact of their mobility experience and their academic qualities. We are pleased to recognise also the commitment to the Erasmus project of the Coimbra Group Universities where they were awarded their degrees and undertook their exchange periods of study.


2016 Laureate of the Arenberg-Coimbra Group Prize for Erasmus Students 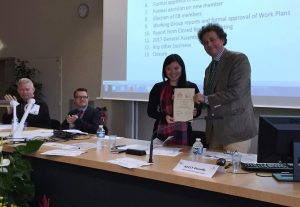