Global Compact on Refugees: the Role of Higher Education

by Dr Mathieu Crettenand, Integration Delegate at the University of Geneva

Various studies show that 10-15% of refugees in Europe hold a university education.  However, apart from a small proportion, they often end up in unskilled jobs (catering, cleaning, transport, etc.) in host countries.  A “de-skilling” trend is thus observed.  In addition to the low employment rate of refugees, the development of innovative and appropriate integration solutions for those with a university level education has become a priority in several European countries.   It is on the basis of these observations that by 2016, in response to the migration crisis shaking Europe, many European universities, including those where Coimbra Group universities are located, have opened their doors to refugees.  Thus, several projects have made it possible to build solutions that were unimaginable four years earlier.  This is the case of the Academic Horizon programme at the University of Geneva, which has opened up the possibilities of such an approach in Switzerland: https://www.unige.ch/horizon-academique/

Following an introduction on the Global Refugee Forum by Prof. Sandra Lavenex and Dr. Çağla Aykac from the University of Geneva, the focus was on three actors involved in successful university integration projects: refugee students, European students committed to inclusion and migration, and civil society, with the involvement of private companies and associations.

The perspectives of refugee students have helped to show the needs of students, whether in terms of issuing residence permits, recognition of diplomas, feasibility of studies or professional integration.  The testimonials demonstrated their will to take ownership of their professional integration, and also the gap between their concrete needs and the more theoretical solutions proposed by the international community.

A large panel of students from different countries, from ESU and OBESSU [2],  debated over the European Student Advocacy on Inclusion and Migration, available in the document   The Students’ Demands on Refugees and Migrants’ Education [3].  This perspective highlighted the importance of students’ engagement with refugees, for example as mentors, as well as in their advocacy with stakeholders.

Finally, a round table, aimed at showing the commitment of civil society at different levels, brought together the actors which made a programme such as Academic Horizon at the University of Geneva possible, i.e. public authorities, private companies and associations in the field of asylum.

With a global approach, the Academic Horizon programme contributes to strengthening the professional integration of refugees and other populations with similar needs. The University Refugee Forum was important for the University of Geneva because, since 2019, the Academic Horizon programme has taken a further step by becoming an official measure for the support of persons with an academic profile from the asylum system.  This inclusion in the Swiss Integration Agenda will make it possible to sustain the programme in the long term and to implement a case management approach of the participants.  The University of Geneva is thus contributing to the collective effort for the integration of refugees in Switzerland, by integrating the new federal framework allowing them to learn a national language more quickly, to consider training and to practice a professional activity.

Even if each national context is particular, the University of Geneva’s programme could not have developed and enriched itself without the influence of the initiatives taken by other European universities.  In particular, the Coimbra Group has been one step ahead since the beginning of the migration crisis by creating a group of contact points for refugees, making it possible for institutions to exchange practices.  Given the varying initiatives and university preparatory programmes existing within the Coimbra Group, exchanging experiences is absolutely necessary in order to come up with an innovative model to integrate refugees into our universities in a sustainable way.

The University of Geneva will continue these exchanges this year, in partnership with the Coimbra Group:

– 24 April 2020: a symposium on language teaching to refugees and migrants at a university level, in collaboration with the UCLouvain (Access2University Programme)

[1] The Global Compact on Refugees, affirmed by the UN General Assembly in December 2018, put in place a new set of arrangements to drive and resource the new comprehensive refugee response model. The central arrangement is a Global Refugee Forum, held in Geneva for the first time, on 17 and 18 December 2019 https://www.unhcr.org/5e20790e4 [2] European Student Union (ESU) and Organizing Bureau of European School Student Unions (OBESSU) [3] These demands were developed through a consensus-based process during the “Global Student Voices: Education and Migration” forum held in Geneva from 13 to 16 December 2019. 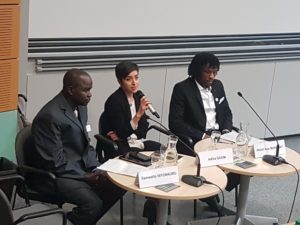 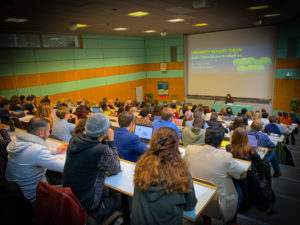