Summer School in Algebra and Topology

The first Summer School in Algebra and Topology took place in Louvain-la-Neuve from 12 to 15 September 2018.

This event is part of a joint project of the Université catholique de Louvain with the universities of Coimbra, Padova and Poitiers, funded by the UCLouvain for the period 2018-2020, promoting research collaboration between the universities of the Coimbra Group.

The 50 participants of the summer school came from ten countries in Europe and in North America. Among them there were undergraduate and master students in mathematics, PhD students, as well as more experienced researchers.

Mme Ana Fernandez-Gacio, coordinator of the international relations in the Science and Technology Sector of UCLouvain, opened the conference with a warm welcome address on Wednesday morning. The interesting mini-courses were given by professors Maria Manuel Clementino (Coimbra), Alberto Facchini (Padova) and Tim Van der Linden (Louvain-la-Neuve), and concerned several subjects of interest in modern algebra and topology (topological algebras, non-associative algebras, monoids, rings and modules). The speakers succeeded in the difficult challenge of making their presentations both accessible to the students and stimulating for the experienced researchers. The programme of the summer school also included a visit of the new university museum MuséeL where its director, Mme Anne Querinjean, gave a thorough explanation on the philosophy and the structure of the museum. After the visit, the informal dinner of the summer school took place in the same nice building hosting the MuséeL.

The second edition of this series of summer schools will take place in Louvain-la-Neuve in September 2019. 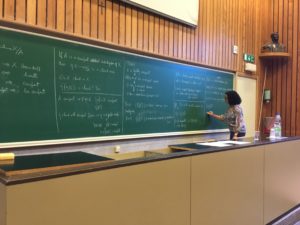 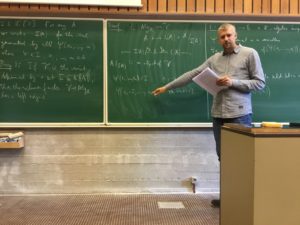