The Chair of the Executive Board of the Coimbra Group Dorothy Kelly signed earlier this month the Prague Declaration, a document highlighting the importance of education in the current world, and the necessity to maintain and honour humanistic and democratic ideas and principles. Representatives of UNICA and EUROPAEUM have also gathered in Carolinum, the headquarters of Charles University to sign the declaration. 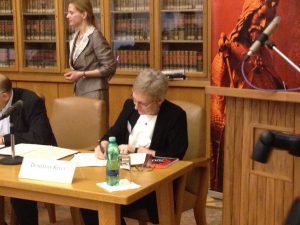 The Prague Declaration which was signed by 76 universities from 29 countries and these three international university associations at a conference of rectors in the historical building of Charles University says the schools’ task is to create space for a free exchange of opinions and it places emphasis on critical thinking.

Another idea expressed by the Prague Declaration is that educated “citizens of the world” are less likely to accept simple solutions, less prone to manipulation or misuse by various kinds of ideology. Therefore, universities must provide education to prepare the young generation to the fact that there are no easy solutions to complex problems.

The conference was held on the occasion of the celebrations of the 700th birth anniversary of King of Bohemia and Roman Emperor Charles IV. Charles University’s rector Tomas Zima and Education Minister Katerina Valachova were the other signatories of the declaration.

The Prague Declaration is an open document which anyone can join.