The ‘Smart and Inclusive Cities’ Summer School is taking place this week at the University of Edinburgh. The aim of this summer school is to review, discuss and propose means to achieve more inclusive, equal, sustainable and safe cities. 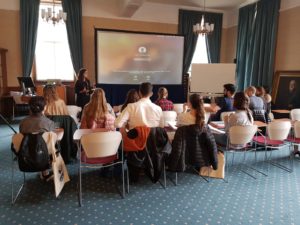 Participants are academics and postgraduate students from both Grupo Montevideo (AUGM) and the Coimbra Group. The summer school is jointly organised by the Coimbra Group Latin America Working Group (LA WG) and the Latin America association with the local organiser at the University of Edinburgh being the Chair of the LA WG, Dr Soledad Garcia-Ferrari and Dr Cristina Nan.

‘Smart cities’ have been the focus of a range of research approaches in the recent past and, although the importance of developing more efficient and connected cities has been widely recognised, in the implementation of smart cities strategies, often the individual and subsequently a varied patchwork of specific communities – all central to these endeavours – are overlooked.

Different models of smart cities strategies can be identified across the globe, from Barcelona to Stockholm, from Sao Paolo to Medellin, from Kigali to Delhi. In order to offer more depth and social awareness to ongoing political trends and research on smart cities, this summer school, and associated workshops, will be led by generating an understanding of the complex networks that interlink:  territory-technology-community-individual.

The student-led summer school will look at the way information and communication technologies can be used to inform the smart city and also to include ‘disadvantaged’ groups of society, who are left out due to their lacking connectivity to the digital grid. The event is divided into different thematic workshops and three parallel round table discussions.

The first agreement between both networks was signed in November 2006, following a raising interest from our members (and the European Commission) in the Latin American area, in specific our Latin America working group. The Montevideo Group is the first network in Latin America with whom the Coimbra Group has developed cooperation and links.