The University of Bologna invited rectors, academics, students, experts and staff to celebrate the Twentieth Anniversary of the Bologna Declaration at an academic conference on 24-26 June in Bologna. The invitation was issued by the University and the Italian Ministry for Education, Universities and Research, under the aegis of the Observatory of the Magna Charta Universitatum, the European University Association (EUA), and ESU – the European Students’ Union.

The conference was organised around five major issues of importance to the future development of the Bologna Process and the European Higher Education Area (EHEA): 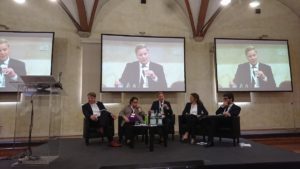 The organisers received over 150 contributions to the invitation to submit abstracts, with a limited number of contributors speaking and participating in panel discussions on the second day of the conference. Among the participants in the panel on Careers and Skills for the Labour Market of the Future was Janne Loikkanen, the vice-chair of the EMP WG. The abstract submitted was a joint effort from the AEM and EMP working groups, and Dorota Maciejowska, the Chair of the AEM WG, was also present at the conference. You can find the abstract Here.

The afternoon session of the conference Maysa Jalbout, world renowned campaigner and Non-Resident Fellow from the Centre for Universal Education, Brookings Institution, on The Greatest Impact of Universities: Educating the Most Vulnerable, a plea to universities to expand their third mission to ensure that all are educated and, especially, the most vulnerable – co-operate with schools, upscale access for lifelong learning, and show greater leadership in ensuring education for all. Universities are needed to lead the way in an effort to make certain that all from earliest childhood have access to education which, notably for the most vulnerable, can be of life-changing importance.

After feedback from the five session, Sijbolt Noorda, the President of the Magna Charta Observatory made his concluding remarks before Rector Francesco Ubertini closed the conference, taking forward the messages from the conference to the Ministerial Meeting in Rome next year.

The proceedings and presentations will be made available at a later stage in a publication, offering analyses, examples of good practice as well as recommendations for future policy and practice, to present valuable input for the future EHEA agenda.

You can find further information and video impressions here.