Universities in a Changing Europe: 30 Years since the Fall of the Iron Curtain

These days, Europe honors the 30 years passed since the fall of the Iron Curtain.  At the same time, Europe witnesses Brexit.

These two events make two corner stones in the contemporary history of Europe. The former one had a major, positive impact on higher education in general and in particular on Alexandru Ioan Cuza University of Iasi; it is our hope that the latter – now delayed for January 31st, 2020 – will not have, overall, a negative impact.

This was a main topic in the Rectors’ seminar organized by Alexandru Ioan Cuza University of Iasi a few days ago; while working together with my colleagues for organizing it, we had a good opportunity to look back into our academic history. 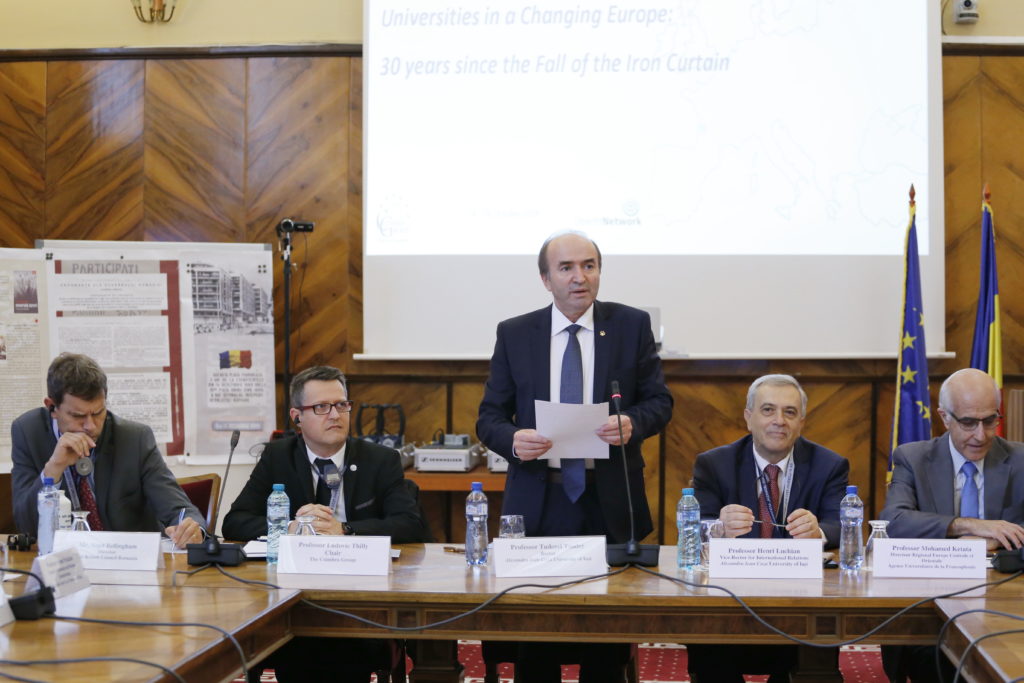 Today, Alexandru Ioan Cuza University of Iasi is a top research university in Romania and a leader in international academic exchanges. Yearly, some 1000 members of our academic community (roughly, 750 students and 250 staff) study, teach or go for training in our 400+ academic partners in the Erasmus+ programme alone.

This was inconceivable 30+ years ago. After 1948, Alexandru Ioan Cuza University of Iasi – as all universities on the Eastern side of the Iron Curtain – had a very modest flow of international exchanges (barely existent towards West), limited access to scientific literature from abroad, academic fields that were politically controlled – besides the general and permanent political intrusion –, severe limitations on the number of students (and hence on the overall dimension and resources of the institution), to name just a few of the limitations and restrictions on academic life. In February 1987, Alexandru Ioan Cuza University students initiated and participated in a mass demonstration against the consequences of the single-party dictatorship, giving the signal of subsequent protests in the country. On December 14th 1989, the very first fighters for freedom were arrested in Iasi and, two days later, protests started in Timisoara and spread in the whole country.

The fall of the Iron Curtain made the revival of normal academic life possible. Many partner universities helped us along this way; academic exchanges, trainings, joint research, support for reshaping curricula and syllabi in social sciences and humanities, and many more. European programmes have been instrumental both for reaching such goals and for restructuring and updating the university management. And, along this way, Alexandru Ioan Cuza University of Iasi membership in multiple partnerships – the Coimbra Group, from 2007, or Utrecht Network, from 2005 – raised our international cooperation to a higher level of cooperation and competitivity.

Lessons of the past may help avoiding errors of the past. But universities face new challenges in a changing Europe.

Lessons learnt from the recent history, our commitment to academic values, academic freedom, and European values at large, made us turn our concerns related to these new challenges into a focused academic debate: the Rectors’ seminar “Universities in a Changing Europe: 30 Years since the Fall of the Iron Curtain”, which took place in Iasi on October 24 and 25 in the Great Senate Hall of the university.

The first characteristic of this Seminar has been the wide interest it arose. Rectors and Vice-Rectors from many Coimbra Group and Utrecht Network universities, previously placed on either side of the Iron Courtain, professors from other partner universities – from London School of Economics, from our very close partner Konstanz University, and also from universities in Ukraine and the Republic of Moldova, as well as the South Korea – participated in the seminar. Eleven of them, along with two of the leaders of the Iasi movement which preceded the Romanian Revolution on December 14th 1989, delivered speeches and then acted as panelists in the four seminar sessions: “December 1989: Narratives on the Romanian Revolution of 1989”; “The 1990s: Freedom and Democracy Regained”; “Universities and the Current Challenges in Europe”; “Sharing European Values”.

The Chair of the Coimbra Group Executive Board, the Vice-Chair of the Utrecht Network, the Directors of the British Council Romania and of the Bureau Regional AUF also participated in the seminar.

The participants signed a declaration which is now open for signing by all the Coimbra Group and Utrecht Network universities. The text of the Declaration makes a perfect conclusion for this editorial: