It is the first time Article 7 has been triggered by the European Parliament. The preceding procedure has three steps: informing a Member State of policies seen as a ‘clear risk of serious breach’, then identifying if there is a ‘serious and persistent breach’, and if this is the case, then the Members State’s rights can be suspended, including the right to vote. It is a rare occurrence, but in 2017 it happened to Poland (judicial reforms); other countries have been debated – Austria (Freedom Party breach of values), France (expulsion of the Roma), Romania (political struggle between president and prime minister) and last year Hungary – but so, far only Hungary has “advanced” beyond the ‘serious and persistent breach’ to the third stage where the European Parliament recommends suspension.

The Executive Board and the CG Office have been monitoring developments over the past many months, both in connection with the situation around the Central European University (CEU) and with developments in higher education and universities in general in Hungary. The Hungarian government’s most recent intervention in academia has been to withdraw funding and accreditation from gender studies, affecting our member university, ELTE, and the CEU, the latter also forced to immediately suspend their courses for registered refugees and asylum seekers because of a special tax of 25% on all immigration-related programmes. EUA secretary-general Lesley Wilson’s The Guardian commentary on 6 September refer to these latest clamp-downs on universities in Hungary.

For anyone wanting to explore the European Union’s values, Article 2 of the Treaty reads as follows: The Union is founded on the values of respect for human dignity, freedom, democracy, equality, the rule of law and respect for human rights, including the rights of persons belonging to minorities. These values are common to the Member States in a society in which pluralism, non-discrimination, tolerance, justice, solidarity and equality between women and men prevail. 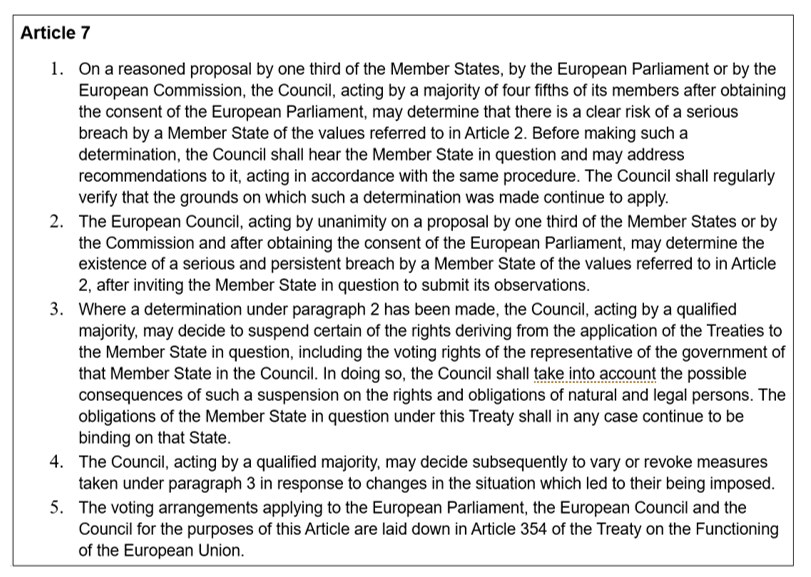